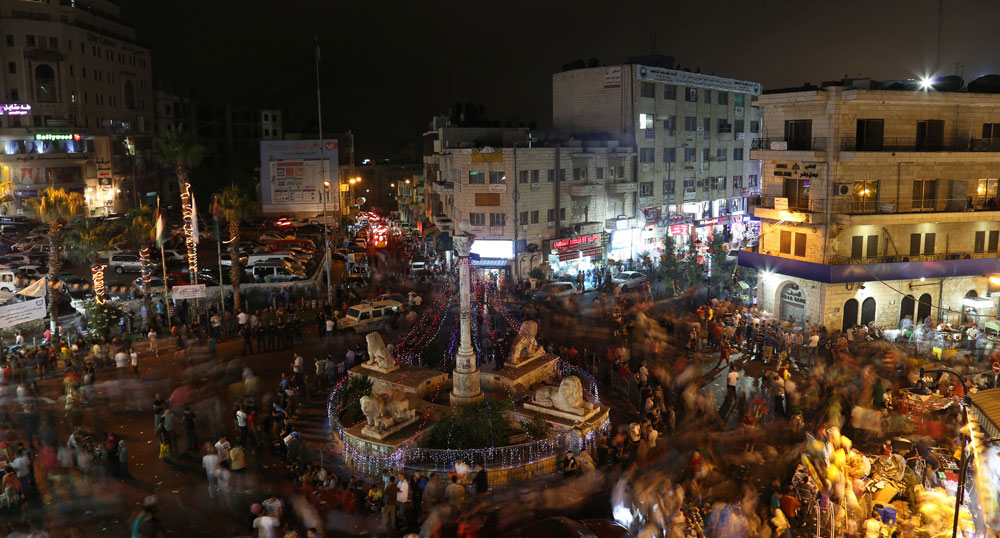 Manara Square: Al-Manara Square acquired its name from being the site that lights up the streets of Ramallah. This square documents the city’s history and its foundation based on the five lions which symbolize the five sons of the city’s founding father Mr. RashedHaddadeen. It also documents the stages of the civil and architectural development of Ramallah. Over the course of the modern history of Ramallah, Al-Manara square was a symbol and the main place for national, religious and social gatherings.

The Municipal Council built the main Manara square in 1923, which became the city center from which the roads diverge. Al-Manara also became the site where civilians gather around for holidays, national days and religious events such as Holy Saturday and national and artistic events.

In 1935, the Jerusalem District Electricity Company (JDECO) and the public undertakings extended the electricity lines from Jerusalem to Ramallah, and they were able to light up most of the houses and streets of Ramallah and Al-Bireh using electric lights. The inauguration of the electricity project in Al-Manara Square took place with the attendance of Ramallah Mayor Dr. Saadallah Al-Qassis, Head of Al-Bireh Local Council Mr. Eid Al-Mousa, Governor of Jerusalem, Qa’imMaqam (“Sub-governor”) of Ramallah, Director of the Jerusalem District Electricity Company (JDECO) and numerous residents from Ramallah and Al Bireh. Al-Manara (which means “lighthouse” in Arabic) got its name from the eight-part lighthouse which stood in the middle of the Square. The person who established this Square was from Ibrahim family and he lived on the outskirts of the city. At about six in the evening, he would leave his house and walk towards Al-Manara Square to light it up amidst a crowd of curious children who would watch as he lights up the city.

During the Nakba of 1948, a statue was built to commemorate the five sons of RashedHaddadeen from whom the families of Ramallah emerged: Awwad, Yousef, Jaghab, Shaqra and Sharaqa. Abu SadeqGhanem was the sculptor of the Lions, but during the Occupation period, they were disassembled and stored in the Municipality storage. These sculptures were re-assembled in Yassir Arafat Square (Clock Square) in 1998, and the Lions present today in Al-Manara Square were donated by an entrepreneur from Jerusalem.