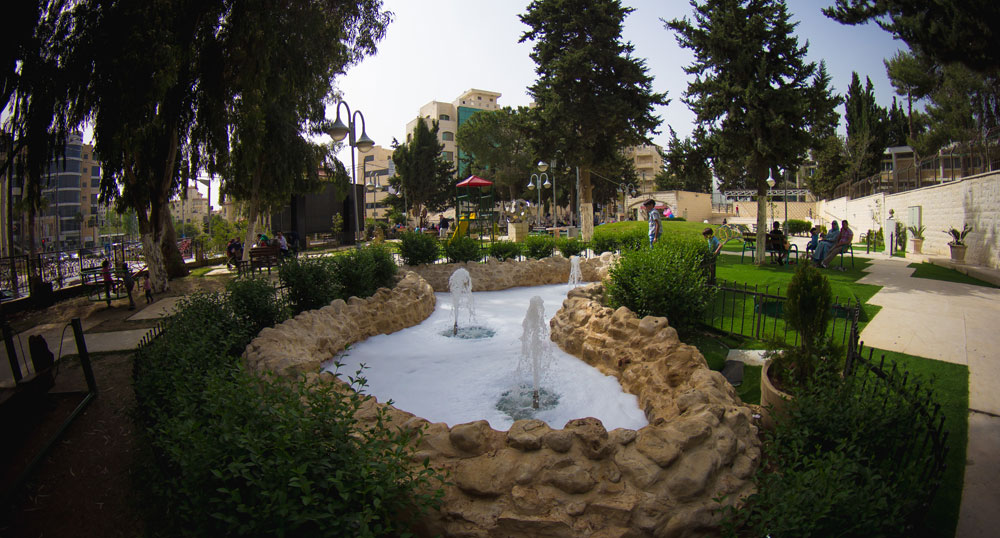 The Garden of Nations is a quiet and safe destination for all Palestinians and foreigners visiting the city of Ramallah. The purpose of this garden is to enhance the notions of Solidarity and Friendship. The garden reflects local and global diversity and symbolizes a peaceful integration between all nations and races.

It also illuminates the path of harmony and unity through tangible and visible pieces of art which represent the history, culture and arts of all the participating countries.

This project was launched in cooperation with the Municipality of Trondheim, who also provided the general design of the garden.

He was a prominent politician and a spiritual leader in India during the Indian Independence Movement. He was also a pioneer of Satyagraha, whose aim was to resist oppression through mass civil disobedience and was strongly established through the principle of Ahimsa (total non-violence). This led to the independence of India and inspired many civil rights and freedom-seeking movements all over the world. Gandhi is globally known as “Mahatma Gandhi”; and Mahatma means “the great soul”. In India, he was known as “Babu”, which means “father”. Gandhi was officially honoured in India as the father of the Indian nation, and his birthday (2nd of October) is celebrated as “Gandhi Jayanti”, which is a national Indian holiday and marks the International Day of Non-Violence on the global level.

Gandhi resorted to the use of non-violent civil disobedience when he was a lawyer living in South Africa at a time when the Indian society was striving for their civil rights. After returning to India in 1915, he organized peaceful protests led by peasants, farmers and laborers in urban areas against the excessive land taxes and discriminatory treatment. After becoming the leader of the Indian National Congress in 1921, he launched national campaigns to alleviate poverty, enhance women’s rights, build a religious and national harmony, put an end to rejection and exclusion, and boost India’s economic self-reliance.

This artwork first appeared in the Gullvåg collection of Oscar Wilde’s “Ballad of Reading Gaol” in order to look at the world behind prison bars where prisoners are prevented from seeing the world and have a nostalgic yearning. This idea was added to the “Mawaqif” exhibition which was held in both Ramallah and Trondheim in 2008, with the attendance of Håkon Gullvåg and Palestinian artist Sliman Mansour. At a later period, Gullvåg drew the aforementioned idea on the separation wall next to Qalandia Checkpoint in 2008. After the Israeli incursion into Gaza in 2009, Gullvåg organized the “Terra Sancta” exhibition which was dedicated to the murdered children of Gaza. The main work of this exhibition was the three-part painting titled “Invasion” (Triptykon). The painting shows a deformed child lying next to a prison cell window and is tied from its umbilical cord all the way to a distant planet.

This bird is one of the largest Australian birds and is the only extant type of the Dromaius species of birds. It is also the second tallest non-flying bird in the world today after the ostrich. The Dromaius species has three sub-types in Australia, and they spread in land areas in Australia and tend to avoid inhabited areas, dense forests and arid desert areas.

The Australian Dromaius bird has a brownish colour, soft feathers and does not fly. Its height can reach two meters and it has a tall and thin neck and legs. This bird can also move to far-away places by jogging or running at a speed of 50 km/hour.

This structure was designed to look like a traditional lace curtain which is found in almost every Polish household. Its design elements were selected to signify the strong relations between Palestine and Poland. The snowflake, which is strongly connected to the Christmas feast, is one of the traditional lace designs of Poland. However, when we remember Christmas, the Holy Land comes to mind; and this shows the importance of this beautiful artwork which links Palestine with Poland.

This sculpture is a replica of Chinese tables of the 15th century which were found in high level society in China.

The idea and implementation of this sculptural work came from Austin Camilleri and the students of the Fine Arts Academy in Ramallah. A local rock was used to produce this artwork which deals with the notion of homeland and alienation. It is an imprint, a rock left in a space, similar to marking a visited place.

Name of artwork: Angel of Unity

The Angel of Unity has three wings which meet together in the middle. This represents the meeting point between the three monotheistic religions: Christianity, Islam and Judaism, and their message which calls for world peace.

This stainless steel artwork is a symbol of a humanity which is not affected by time or place.

Name of artwork: The Artist’s Wife

It is a religious building in which the Buddhist rituals are practiced. At a later period, it started representing the architectural civilization of East Asia. The Pagoda idea came from India from the Buddhists who used to practice their religion in another religious building called “Stupa”. What makes the Pagoda unique is the extension of its floors and the large number of its layers. The Pagoda structure was made of wood, and a later stage, bricks and stones started being used in its construction. The Peace Pagoda of Ramallah, Palestine is considered the first pagoda in the Middle East.

This women in stone represents Freedom and Continuity.