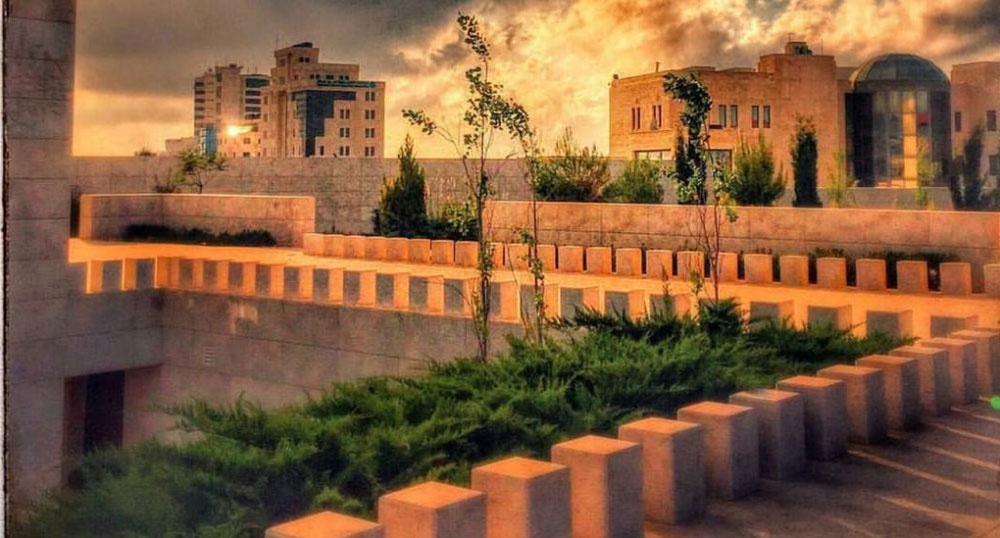 On March 25, 2002, the Israeli occupation forces besieged the presidential office of the late President Arafat for three years, during which time the Israeli military fired artillery bombs and destroyed most of the Muqata’a compound, which houses the security institutions of the Palestinian Authority. A mausoleum in memory of President Arafat, the symbol of the Palestinian struggle for liberation, was erected on this site. Because Israel opposed Arafat’s wish to be buried in Jerusalem, the Mausoleum was built on water to express its impermanence, and is meant to be moved in the future to fulfill his wish. A museum presenting his life and his political engagement is located next to the mausoleum. The Yasser Arafat Museum is housed in a sleek white building and an aerial walkway links the museum building to Arafat’s confined old office and bedroom. The Museum epitomizes the contemporary national Palestinian memory by documenting the career and life of Yasser Arafat in a moving and compelling way. On display for the first time are a range of Arafat’s possessions, including the famous sunglasses he wore when addressing the United Nations in 1974, a number of his iconic kuffiyehs (scarves), his gun, Palestinian passport, photographs, and audio material. The Museum also traces a century of Palestinian history, including the Nakba – the catastrophe – as Palestinians call the period leading up to and including the 1948 creation of Israel.